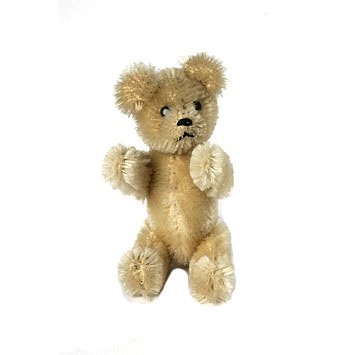 The Schreyer Toy Company, more commonly known as Schuco, flourished during the first half of the twentieth century. It was founded in 1912 by Heinrich Muller who, after an apprenticeship with Gebruder Bing (toymakers), began his toy company with Heinrich Schreyer.

In 1913 Schreyer introduced it’s first range of soft toys, which were wheeled animals, one of which was a bear. It was very successful however the two owners were conscripted into the military after the outbreak of WW1, which closed the factory in 1914.

After the war, Muller recommenced the business, with a textile merchant, Adolf Kahn, in 1919.

In 1921, the trade name ‘Schuco’ was registered. Schuco also launched the highly successful ‘Yes/No’ bear in the same year. This bear’s little tail was a lever which moved his head left and right, and up and down. He spawned a huge range of toys using the same principle, for the next fifty five years, until the factory ceased production!

Schuco also produced many other novelty bears during the 1920s, often incorporating mechanical workings. The miniature range became one of it’s most popular ranges, each of which had a mohair covering over a metal frame, little felt paws and were only 6cm tall. The little bears appealed to children and also to women when the variety was extended to a range of accessories, including teddies which concealed a lipstick, perfume or a mirror.

The Second World War again closed the factory for toy production, and the buildings suffered several bombing attacks. The factory recovered after the war, though, and was able to export large orders to the U.S. Schuco teddies from the 1950s-60s are known for their large ears and big eyes, and it is this cute look that added to their success, and their appeal to collectors today. Another very successful range from the 1960s was the ‘Bigo Bello’ series, of teddies and animals with happy, animated eyes, partially dressed, and which included  ‘soccer player’ teddies, bunnies and pussy cats.

From 1965, several factors caused the closure of many of the major teddy factories, including Schuco. It had experienced  a sharp decline in sales of its tin toy range, due to competition from the budget-priced Japanese toy makers. Whilst the teddy bear arm of the factory continued to do well, it ultimately wasn’t able to keep the rest of the company buoyant, and Schuco declared bankruptcy in 1976.