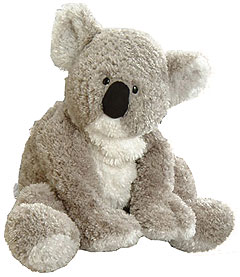 The koala is an iconic Australian marsupial. Cute and soft, it was inevitable it would be made into soft toys!

Australia's 'bear', the koala became a popular subject for toys in the 1920s. The first soft toy koalas were made of koala, wallaby or kangaroo fur, with jointed arms, legs and head. Eyes were made of leather shoe buttons with a pure rubber nose. These noses have tended over time to become hard and brittle. Claws were leather. These toys are comparatively rare and highly collectable. Stuffed with woodwool, they have also become a favourite with insect infestations!

Koalas also became a very popular and fashionable trend during the 1920s. A wide range of koala merchandise was produced, not just for children but also for women and the home. These included koala tea cosies, muffs, purses and handbags! Each was also made from the same materials as the soft toys-fur, shoe buttons and leather. Knitting patterns for tea cosies offered another alternative for the home!

Many commercial teddy bear manufacturers also made koalas in the range. Steiff, the famous German manufacturer, as did Deans in England, and others around the world, produced mohair versions with glass eyes, and stuffed with woodwool.

Koala toys continued to be popular. Generally they were now produced from kangaroo fur, but were often no longer jointed, having a fixed head and limbs. The arms and legs were outstretched in a 'starfish' shape, and still with shoe button eyes, and leather claws and nose.

Sheepskin versions were also made, also with these features, and stuffed with woodwool.

Koalas made their way into popular children's literature at this time, such as Blinky Bill!

The koala toys of this period now had glass eyes and had leather noses, though increasingly synthetic rubber was used. Kapok or a kapok-woodwool blend was used as the stuffing. The shape remained the same as earlier versions! Unjointed, with outstretched arms, they continued to be able to sit on their bottoms unaided.

Glass eyes were now used, with kapok as the stuffing. These koala toys, made from kangaroo fur, tended to be lighter in colour than the very early ones, of wallaby, rabbit or koala fur, which were longer and darker. A common problem with the kangaroo skin toys is thinning of the fur and bald patches. This could have been due to problems in the tanning process.

Koala toys were still made from kangaroo skin, with synthetic rubber noses and claws, in the starfish shape. Kapok-filled, they needed to comply with new safety regulations and therefore to have plastic safety eyes. Increasingly, though, the koalas were made from synthetic fur, as public condemnation of the use of animal fur increased.

Koalas continue to be most popular as souvenirs of Australia, by overseas tourists. One of the earliest and most prolific companies responsible for their production is Morella.

Morella was, and is, largely known for its tourist trade toys. Morella started making its range of fur souvenir koalas, kangaroos and teddy bears in the 1930s. Made from wallaby or kangaroo fur, these early toys were filled with cork or woodwool, and later with rubber or flock.

Paramount had a popular range made from rabbit fur, during the 1950s, and examples with tags can still be found.

Many other companies continue to also include koalas in their range. The appeal of the koala ensures it will remain a popular toy!

My father was in the Merchant Navy and bought this bear in Australia when he heard of my birth in 1947. It has lived with me in UK ever since then and is called Kaia.
At 65 he is wondering about his retirement years !!
Does he have any monetary value and if he wanted to donate himself to a museum would anybody be interested ?

Hi Val,
thanks for your enquiry. It is wonderful that you have been able to keep Kaia! He is probably made from koala fur, with leather nose and claws, and stuffed with woodwool. His eyes would either be glass or shoe buttons. He is very collectable, due to his age and his good condition. A museum would be happy to take him, or there would be collectors happy to buy him on ebay! His value at a fair would be $60-$100 AU. Hope this helps! 🙂

Sharing a photo of my three elderly fully jointed Koalas talking about the good old days .. which for these old arthritic chaps was probably in the 1930s. All three have glass eyes, are cotton stuffed, the two large boys have rubber noses, and the small chap has a leather nose. All kangaroo fur.

What do you think of these characterful trio?!

Hi Karen,
I apologise for the delay in replying to your email. They are wonderful! The old jointed koalas have so much character and are comparatively rare! Yes, they are all from the 1920s-early 40s. It is quite rare for the largest one to still have all his rubber claws. The centre koala is probably a ‘Billy Bluegum’, modelled after the character created by Norman Lindsay, and who made his very first appearance in the ‘Bulletin’ newspaper, in 1904!They are a fantastic collection 🙂

I also really love the look of the old jointed koala toys.

Here’s a photo of my oldest two, both over 100 years old.

The large one on the left is very early, mohair, jointed limbs, one shoe button eye, woodwool stuffed in his body and head, and cotton stuffed in his limbs. He had a glued on nose originally. Stitched mouth.

They have been much adored and loved companions, and are now enjoying a slower pace of life in their retirement. 🙂

Hi Jo!
I was so happy to find your site today! I have acquired a very old jointed koala bear with what I believe to be kangaroo hide as his wrap and stuffed with woodwool. His nose is solid rubber. I have tried to upload photos of him but it keeps telling me I can only upload images, which is what I’m trying to do! Do you have an email address I could send some images to? I’d really appreciate your input as I’m a bit perplexed about his origin. Thank you!

Does your koala look like any of my three jointed koalas in the photo of the posting before yours? The jointed koala in the middle of my trio is a Billy Blue Gum, which were made in Queensland – does it look similar to yours? I’ve found advertisements for these dating back to 1931.

I have a stuffed koala. When he was purchased in 1986 and were told real koala fur. He has plastic eyes, nose, and rubber paws. He is 22in tall by 17in paw to paw. There are no tags. Any information and valuation would be appreciated, thank-you.

Hi,
I have a stuffed koala,and he hegiht 5 inchs,he has solid rubber nose and plastic claw,glass eyes. I need to find a similar bear,can you help me?

HI was wonder how old this koala bear is? my dad was given him in 1949..thanks wendy

Hi Wendy,
I’d love to help you to know more about your dad’s koala. However, the photo doesn’t seem to have loaded properly. Would it be possible to re-send it?
Thanks 🙂

I have two vintage koalas ( one short hair and one ling hair) which I would like to place with a collector, as I am in the process of down sizing and my grad kids are too young to appreciate them. They are both from the 1960’s and are 40cm high.

I live in Warranwood Vic. Would you be able to suggest a local collector who might pay a nominal amount to purchase them.

You have probably seen heaps of these but I have to ask what era and value it is as I am unsure. The height is 30cm tall has a tag that says”Genuine Kangaroo fur made in Indonesia.I have added another teddy that I was unsure of hoping you may have an idea.

Hi guys I was wondering if you could give me some information on a koala bear I have been given. It has had 2
Owners before me and the last owner had it for 40 years. It has been well looked after so I’m just keen to work out how old it is and possibly it’s value. It is 62cm tall and 48cm wide. It sits on an angle towards me. Seems to be made from kangaroo fur with a plastic moulded nose and flexible small plastic claws. I think it also has glass eyes and wood wool stuffing. But not sure as it is in near perfect condition.

Hi Angela,
He is a lovely big Koala!
It is difficult to say exactly who made him, as many companies competed for the market when he was made, and the styles were copied amongst the manufacturers! Two of the most prolific manufacturers were Morella and Paramount. It is possible he was made by one of those!
He would have been made in the late 1950s-60s, most probably the 1950s if he is stuffed with woodwool. He is made from kangaroo fur, with glass eyes and a moulded rubber-like plastic nose.
He would sell at a Collectors’ Fair for $75-$100.

There were certainly far fewer koalas made in this large size, so he was special, and would have been bought to be a ‘special’ present. He was made to impress! 🙂

I’m looking to replace my loved and much loved Koala hand puppet made from kangaroo fur. It was bought for me in the 80’s by my late Nanna. I had kept it safe all these years.. But we got a puppy and he got into my bedroom and ripped it up. If anyone knows where I could find one, I would appreciate any info. Thank you x

I’m still waiting to hear from anyone interested in hearing the history of Billy Bluegum fur koala toy patented in 1925 and made and sold by my Queensland family company until the mid 1950s. I’ve all the details but, alas, yet to locate one to buy. Any seller?

I’m a social history curator at Queensland Museum. We have a Billy Bluegum koala toy in our collections and I’d be very interested to learn more about the history of the toy and your family’s connection.

Hi I collect teddies and whilst browsing on eBay found this group of 4, fell in love and bought them £12 for all 4 which until after when I looked them up realised was probably a bargain. I thin the far left is 1970s from your information rubber nose and claws plastic eyes long fur 25cm tall. The other 3 I’m not sure about. All have leather claws, boot button eyes, rubber noses and crunchy stuffing one paw split and can see wood wool. Can you tell me when they were likely made? Thank you